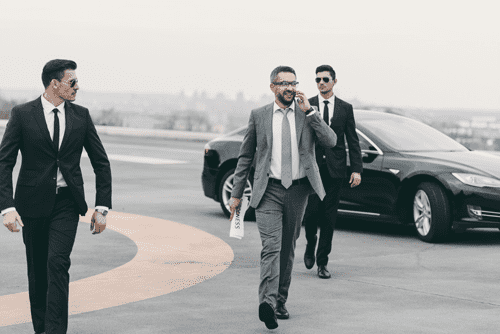 Scandals With Celebrities & Their Security Teams

CPOs and high-level security teams are trained to protect high-profile people in a range of situations, be they mundane or dangerous. As such, it’s no wonder that when it comes to celebrities, there are a whole host of interesting and even scandalous stories about famous faces and their bodyguards.

In the event that shook the nation, Princess Diana died aged 36 in a car accident in Paris in 1997.

As a member of the royal family, Princess Diana will have been under the protection of some of the most highly trained and respected security staff in the world. Yet, her car was still hunted by paparazzi through the streets of the French capital, which was initially believed to be the reason for the crash. Later though, an investigation was performed, which found that her driver had been under the influence, revealing one of the biggest security scandals of them all.

As one of the most followed, most sought-after celebrities in the world, it’s no surprise that Kim Kardashian is at the centre of a few stories. Her infamous and traumatic robbery in Paris is probably the most well-known when the reality star turned businesswoman was attacked in her hotel room and robbed of her engagement ring.

But even day-to-day, there are reports of numerous times in which security has needed to step in, whether that’s to intercept packages of diamond rings and emergency contraceptives delivered to the star’s house or to remove fans from outside her home.

The co-founder of Microsoft took a cream pie to the face whilst his security team escorted him to a meeting with educators, business leaders and government officials in Brussels.

A breakdown in his security team exposed Gates to a group of pranksters led by Belgian personality Noel Godin who threw pies at the then richest man in the world as he walked past.

Following the recently marked 10-year anniversary of Whitney Houston’s death in February 2012, her then bodyguard has recently spoken out about his time working with Houston. Most notably, the moment he found her having passed away.

Ray Watson, who was the star’s bodyguard for a decade, had been privy to Whitney’s battle with addiction throughout his engagement with her and, as probably the closest person to her at that time, was sadly the one to see her at the end.

CPOs and security staff have an insight into celebrity life that the average person would never be able to access. They see the dangers of being famous, whether that’s people looking to rob their riches or the pressures of fame amounting to addiction. That’s why when it comes to hiring security staff, it’s crucial that candidates go through a vigorous recruitment process.

At Melissa Offer, we understand that the need to put trust in your security team and CPOs cannot be overstated. As a leading private staffing agency, there’s no better choice to support you with hiring your security team. Reach out to us today for more information.